A few years back, my friend Jill and I ventured into the city for a Thanksgiving cooking class. We were really looking forward to it, as we had been here before for another class and loved it. We were both hosting Thanksgiving that year, and we were excited to get some new, fresh recipes to make for our guests.

The only thing bothering us?

This crazy thought occurs to me year after year. My kids had always had a “Thanksgiving Feast” before the actual Thanksgiving day in their preschool classes and I was always bummed that they were going to eat the Thanksgiving foods before Thanksgiving. Do you think this bothers them at all?

Why does this bug me so much? I have no idea! We all have weird hang ups with Thanksgiving. Don’t deny it! We were at a party the other night with some friends and one of  the guys was talking about how he doesn’t eat for the whole day so he can save up a enough room for Thanksgiving dinner. My husband was nodding in agreement the entire time the guy was telling this story as if he had never thought about doing it any other way.

So…I made the cranberry sauce for my son’s Thanksgiving feast yesterday. He kept asking for tastes and I was trying to fend him off.

“You are already having TWO Thanksgiving feasts! Do you want to ruin them by tasting the cranberry sauce now???”

He replied by staring at me, completely confused.

That was right before he grabbed the spoon and gobbled up a bite of cranberry sauce.

We can only hope he actually enjoys his feast today at school after sneaking that forbidden bite.

Right now, either you are thinking I am crazy, or emphatically nodding your head in agreement with me.
Whichever it is, I love you anyways, so I have included the ABSOLUTE BEST recipe for homemade cranberry sauce today on the blog! I adapted it slightly from the class I took many years ago, but from a former cranberry sauce hater (the gelatinous canned stuff…ewwww….I know some of you love it…but ewwww..) this is a refreshing addition to the Thanksgiving Feast.

Don’t cheat and have a bite before the big day though. You will definitely disappoint me. 🙂 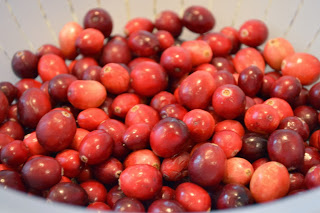 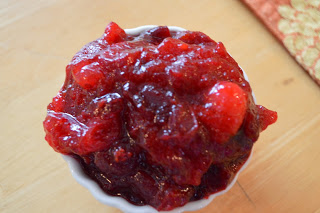 Assemble all ingredients in a medium saucepan. Stir until cranberries are coated. Heat over a medium flame and bring to a very low bowl. Cook until mixture becomes syrupy and cranberries begin to pop. This should take around 15 minutes, and you should be stirring occasionally to make sure the cranberries are not sticking and burning at the bottom of the pan. Remove from heat, let cool. Transfer to a container and chill for at least three hours. Serve at either room temperature or slightly chilled. Enjoy!

**Recipe Adapted from a class at The Chopping Block** 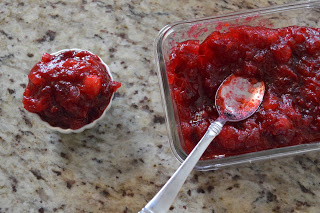 What is your favorite dish to make at Thanksgiving? Let me know in the comments below!

« Fun Fall or Holiday Wreath
Happy Thanksgiving! A fun Thanksgiving “Turkey” For You All! »