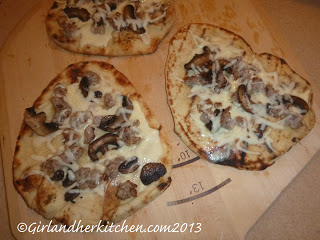 On weekends, my husband often makes dinner. It’s something he enjoys greatly, and I love it. It frees me up to be, what I like to call, “simply creative” with lunch. In other words, I get to try out recipes that aren’t a big deal meal, but are more creative than the basic sandwich. That’s how I arrived at this recipe.

I patterned it slightly after a pizza I had at a local Italian restaurant, which I fell in love with. I just didn’t have the desire to make my own crust, homemade sausage, or fresh mozzarella. Ok, I admit it: I was feeling lazy! The great thing is, this easy pizza is so delicious you won’t mind being lazy at all.

The trick to it’s speediness is the fact that the crust is a Naan bread. Naan bread is a leavened, oven-baked flatbread. It’s typical of, and popular in, West, Central and South Asia. It gives the pizza that chewy, crispiness you want in a pizza crust. It is more characteristic of pizza dough than a flatbread or a pita would be in that it has more of the bite to it.

This recipe takes all of 20 minutes from fridge to plate. It’s simple and rustic and loaded with flavor. The white sauce is creamy and makes for a lovely change of pace from the usual red sauce sea that typically engulfs most pizzas. If you don’t like mushrooms, feel free to substitute another vegetable. Onions would be lovely. Green peppers would add another dimension of flavor and take it in a whole new direction. Anything you like on your pizza you will love on these.

It would be a great, lunch, dinner or even a yummy snack while sitting around a campfire in the evening. Try it for yourself and see. 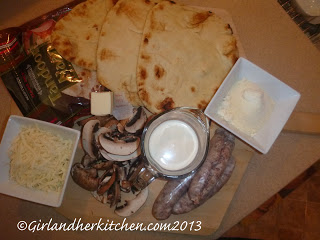 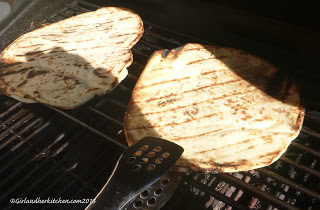 In a pan, melt the butter, add in the heavy cream, and Parmesan. Simmer for about 5 minutes, but do not boil.

Place Naan breads on a foil-lined baking sheet. Place some of the heavy cream/cheese sauce on each of the Naan breads. Top with the sausage and mushroom mixture. Cover top with shredded mozzarella. 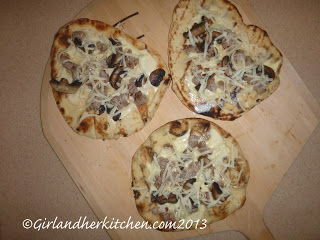 Place back on the grill and close it. Heat until mozzarella is melted and bubbly. Slice into quarters and eat. It’s a hardy lunch for 4 to 6  or, with the addition of a salad can be a light summer dinner for 6 to 8.

If you would like to try this in the oven, just toast the Naan in the oven until crispy, add your toppings, and finish it under the broiler to melt the cheese.

This is a quick, delicious, and simple way to enjoy pizza at home, at the campsite, or it’s easy enough to make ahead and travel with. It reheats really well and still tastes amazing the next day–cold or reheated. Please try it. I know you will love it. 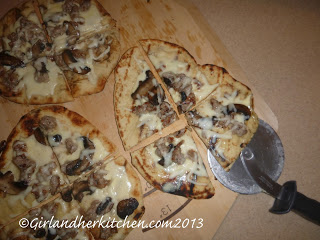