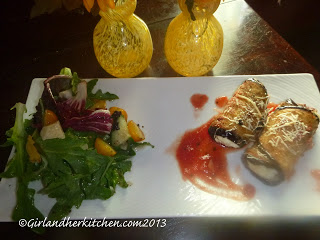 My husband and I have a favorite Italian market where we get those definitive ethnic items that you just can’t find in every supermarket. While it’s a two-hour drive, we often go out of our way to visit Tenuta’s in Kenosha, WI, a tiny neighborhood store packed with pastas, cheeses, wines, spices, and every imaginable Italian delicacy.

Tucked in amongst all the other products is a deli counter where they sell fresh meats, cheeses, and the most delectable array of fresh, ready-to-eat treats. Last time we were there we decided to try their eggplant rollatini. It was out of this world. We had three to split and, I don’t mind telling you, we fought over the last roll like it was the last edible thing on the planet. I love my husband, but if he wasn’t driving, I would have contemplated shoving him out of the car.

Instead, I decided to split the last one with him and then try to recreate them at home. That way we could each eat our fill and even have leftovers. It was better than a life sentence! (I was worried they wouldn’t let Tenuta’s deliver rollatinis to me in the big house!)

After a bit of reverse engineering, I figured out a recipe and went to work. It turned out perfectly. It was crispy and creamy, savory and succulent; everything I was hoping for and more. When we ate them from Tenuta’s they had come out of the refrigerated deli case and were still delicious cold, so when I made them at home, the taste of one hot out of the oven made them even more amazing than I dreamed.

The eggplant is cooked to a delicate crispness while the creamy ricotta filling is flavorful and unctuous. Add a little marinara and it’s the perfect flavor combination. I added a lovely green salad and some crisp Italian bread. And, don’t forget the red wine. It’s magnificent. 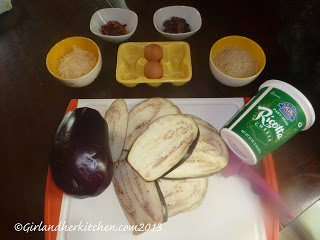 Mix 1 egg with a Tbs. of water and beat together. Dip the eggplant slices into the egg and then into the bread crumbs to coat. Pour a liberal amount of olive oil into a large frying pan over medium-high heat. Fry eggplant until its golden brown on each side. Place on a cookie sheet covered with paper towel to drain any excess grease. Preheat your oven to 350 degrees.

In a large bowl combine ricotta, 1/2 cup of the Parmesan, and the remaining egg. Separate into three bowl. Add olives to one bowl, tomatoes to one bowl, and leave the last bowl as it is.

Take a baking sheet or pan and cover the bottom with marinara sauce. Take a slice of eggplant, put a spoonful of ricotta mixture in it and roll up. Place seam side down in pan with sauce. Repeat until all eggplant and ricotta mixtures are gone. (I don’t cover my eggplant in sauce because I hate to lose the crispy coating I’ve created in the frying portion of the recipe.) Sprinkle rollatini with remaining parmesan cheese shreds. 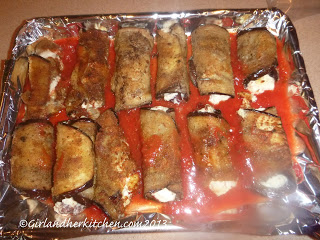 Place the pan with rollatinis in the oven and bake for 20 minutes. Serve with extra sauce on the side and, of course, more Parmesan, because how can you ever have too much of that? 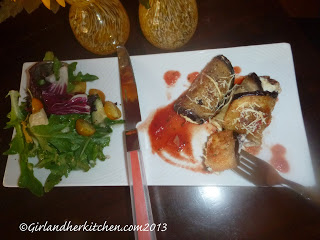