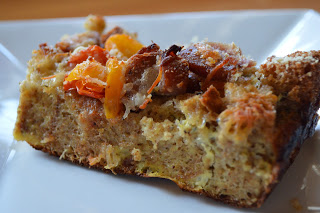 So the other day, when I was trying this recipe out, my friend Vickie came to the door to drop my daughter off, and she wanted to know…what was cooking?
She came in to check it out, and of course, before we really talked about her original question, we had about a million more topics to cover.
That’s what kind of friend Vickie is. The kind that comes in, and an hour later, you are trying to remember what started the conversation in the first place.
I met Vickie shortly after we moved here many years ago. She was organizing a dinner for ladies in the neighborhood and we got to talking via email, and realized we had a lot in common. Fast forward eight years and I feel like I gained another member of my family.
The craziest part? Our friendship not only survived one of the hardest things she ever had to go through… it got stronger.
Let’s talk about great moms for a minute…one in particular…I mean, this is a Mother’s Day post, right?
About three and half years ago, Vickie’s son was diagnosed with leukemia. It was a shocking moment for every one that knew her. We just couldn’t believe that it was happening to someone we knew. It is the sort of thing that you just want avoid and to curl up and sleep until it is over. Unfortunately when you are a mom, that type of avoidance is just not possible. Although they had a rocky start, Vickie swung into momma overdrive. Not only was she the best mom that her son could have had through it all, she even took it one step further. She became an advocate for kids with cancer and spoke at various events and fundraisers. She and her son became the face of fighting cancer and her son was stronger because of the support he received.
Being a mom is hard. It is so hard some days that you are not sure if you will make it through the day. Vickie lived the extreme of hard days as a mom. She lived it for three and a half years and more than succeeded.
She should be honored as a mother, and as a friend. She is an amazing person and you are lucky if you know her. On this Mother’s Day, I like to recognize those moms that really work hard for their title.
Vickie is one of them.
There are many more out there too.
Nowwwwww, back to that question…
What was it again?
Oh yeah…
“What’s cooking?”
Well, it is this delicious new recipe that I made that is perfect for a brunch! It is an egg casserole, but with a few healthy twists, and tons of great flavor. I substittuted skim milk for the usual whole milk you find in egg casseroles. I used lean turkey sausage and part skim mozzarellla cheese too, upping the flavor factor, but not adding a ton of fat and calories. I loved this recipe because it was so good and a little different from the usual egg casseroles I make.
Make it for someone special! 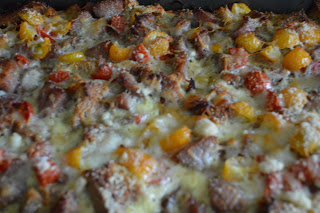 Preheat the oven to 350 degrees. Spray a 13×9 inch pan with cooking spray. Layer the bread cubes on the bottom. Set aside.In a saute pan, heat olive oil and cook Italian sausage, onion and garlic until sausage is fully cooked through and onion and garlic is golden. In a large bowl, whisk together eggs, egg whites, milk, 1/4 cup Romano cheese, Italian seasoning, salt and pepper. Layer sausage, onion and garlic mixure over the bread cubes in pan. Pour egg mixture on top. Layer tomatoes, mozzarella cheese and the rest of the romano on the top. 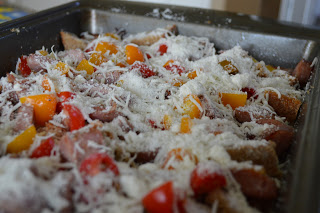 Bake for 40 minutes until fully cooked through, and the cheese is lightly browned and bubbly. Let stand for 10 minutes before serving. Slice and serve.